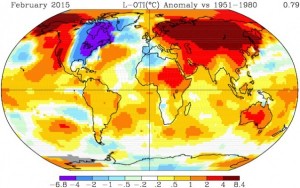 Only the eastern US, far southern Europe, and northern Africa were below average in February. The rest of the world was above average making February the second warmest on record. Alaska, Asia, and parts of the US west coast were as much as 15 degrees F above the 1951-1980 average, helping make the March 2014 through February 2015 the warmest 12 month period on record.