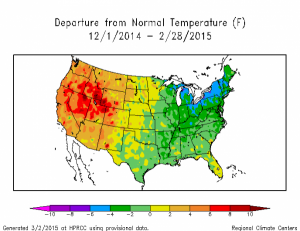 For those who cite our cold Midwest winter as so-called evidence of there being no climate change, consider this. More than 20 weather stations in the west saw their WARMEST winters on record including San Francisco, Las Vegas, Seattle, Salt Lake City, and Portland, Oregon. As cold as it was in the east, it was even warmer in the west. Western weather doesn’t, in and of itself, “prove” climate change is real any more than a cold east “proves” it isn’t. One locale, or even region, is too small of an area to determine trends and it is global trends that demonstrate a warming planet. If you’re less than 30 years old, you’ve NEVER lived through a colder than average year. That’s a piece of data that is difficult to explain as anything other than a warmer globe.